PFA in your Water

A state of emergency has been issued after the discovery of per-and polyfluoroalkyl (PFAS) compounds in the public water system that serves residents of Parchment and other portions of Cooper Township.

Levels were found to be 1,587 parts-per-trillion (PPT) — 20 times the EPA’s established lifetime health advisory of 70 PPT. Residents are advised to stop drinking the water immediately.

As far as water contaminants in the area go, PFAs in water is a relatively newer concept than other issues, but is something to watch moving forward. PFOA, the most notable substance of the family, was found to be a part of the manufacturing process of Teflon. The EPA sued Teflon manufacturer DuPont in 2005 for failing to report a health risk to both humans and the environment. The company paid a $10.25 million settlement.

Also called “C8,” PFOA has been detected in the blood of more than 98% of the general US population, though it is in the low sub-parts-per-billion range. The company that invented PFOA and PFOS, Minnesota-based industrial conglomerate 3M, stopped producing the substance in 2002. Since, there has shown to have been a steady decline of PFOA in the bloodstream of humans.

Where is PFOA found?

It seemed like a good idea at the time. Until 2002, PFOA and PFOS were integral in producing goods that repel dirt, grease, water and stains. These contaminants can be found in the manufacturing process of a variety of products, including non-stick cookware, carpet-care liquids, treated apparel, upholstery or textiles, sealants, dental floss, floor wax and non-woven medical garments. Though PFTE non-stick cookware was proven to have PFOA levels, a recent study found levels that ranged from undetectable to 4.3 parts per billion, and it is not currently considered a major pathway for PFOA.

The two biggest issues with these substances is that they don’t break down in the environment, and are fairly ubiquitous, known to be located in food, drinking water, outdoor and indoor air, dust and food packaging. Because of their strong molecular structure, PFOAs are more difficult to break down than organic chemicals.

According to a study from 2002-2005, “people who lived in the PFOA-contaminated area around DuPont’s Washington Works facility were found to have higher levels of PFOA in their blood from drinking water. People that drank more tap water, ate locally grown fruits and vegetables, or ate local meat, were all associated with having higher PFOA levels. Residents who used carbon filter systems had lower PFOA levels.” Studies have found that using carbon-activated filters can reduce PFOA’s by up to 60%. 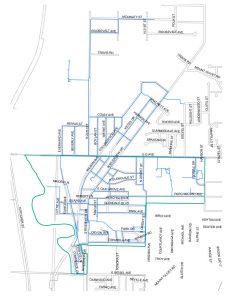 Click on the map to see if your area is affected (Source: mLive)

Recommendations by the EPA

The EPA has issued a “Health Advisory” for PFOA and PFOS, but this does not amount to any actual forced federal regulations on municipalities to control and monitor them. The EPA has established health advisory levels at 70 parts per trillion. What does this mean? To compare 70 parts per trillion, think of a drop of ink in a backyard pool. According to its website, “EPA’s health advisory level for PFOA and PFOS offers a margin of protection for all Americans throughout their life from adverse health effects resulting from exposure to PFOA and PFOS in drinking water.”

A few of the adverse health conditions a lifetime of exposure can lead to are developmental effects in children, kidney and testicular cancer and immunodeficiency disorders.

For more information, check out the supporting documentation here.

Where Culligan Can Help

Call your Culligan of Los Angeles today to get a FREE water test and find out of your tap water contains PFOA-type contaminants.

We offer two testing options at Culligan. Our basic water testing is free. When the testing is complete and the results have been determined, we will contact you with our customized recommendations for eliminating any contamination that may be in your home’s water supply.

Immediately test the water in your home if you experience any of the following: